Villa Valmarana Bressan was commissioned by nobleman Giuseppe di Bernardino Valmarana between 1542 and 1546. Historians consider it as one of Andrea Palladio’s first works according to an autograph Palladian preliminary drawing for a “villino”, which is kept at the Royal Institute of British Architects Trust of London. The building has a square plan with a pitched roof and opens out, beyond the “serliana”, into a square lobby leading
to a smaller hallway, on the two opposite sides of which there is a closet and a staircase.
The hallway leads to a central reception hall, giving onto an orchard in the south and symmetrically opening into three rooms of decreasing sizes on its two opposite sides. Each of these smaller rooms is related to the others by precise, harmonious proportions, making the plan a coherent whole even in its elevation. The four side rooms on the two southern sides of the reception hall have got a vaulted ceiling, which even the “loggia” should have
had according to Palladio’s drawing.
The severe main front in the north includes a “serliana” with side round openings (“oculi”) supported by two Doric columns inside a central section slightly set back in the front; on each side there is a great rectangular gabled window. In the Palladian drawing the “serliana” was within a larger arch and without “oculi”, just as in the first plan for the loggia of Palazzo della Ragione, which Palladio presented in those same years.
The Villa of Vigardolo represents an outstanding step in the development and evolution of the architectonic thought of Palladio, who, differently from his earlier plans, was now able to rely on his recent experience gained during a journey to Rome with G.G. Trissino, in 1541.The other fa¢ades of the edifice are drawn in a sober, simple style, but what is striking is the disproportion between the general size of the building and the height of the front.
That This is due to the increase in height taking place in the 18th century as it can be detected both from the records and from the marks which can be noticed in the interior masonry of the attic.Even the decorations and frescoes reveal the contribution of different epochs. The loggia is decorated with trompe-l’oeils showing monochrome portraits of twelve Roman emperors set in niches, whereas a painted frame completes the symmetry of the side stone entrances. The refined ornamental panels over the doors showing four halflength portraits of women belong to the late 18th century; thanks to the Valmarana family tree, whose coat-of-arms is painted over the entrance door, the dames wearing elegant clothes can be identified as the last Valmarana owner’s mother and daughter.
Hunting scenes can be admired in the late Renaissance panels over the doors of the other rooms, as it was typical of ancient mansions surrounded by nature. In the southern central hall the trompe l’oeils represent the ruins of buildings which open onto a landscape including a Dionysian scene by Veronese’s school. From the traces which can be found even in other rooms the whole interior is supposed to have been frescoed , in accordance
with the taste of that period. In the same room the visitor can admire the frieze of 18thcentury frescoes running high under the ceiling and describing Joseph’s stories attributed to the painter Costantino Pasqualotto (1681-1755).
The premises of the villa include two wings, one in the west and one in the east, extending with the farm-workers’cottages up to the dovecote. The ceilings of the two rooms inside the east wing are decorated with frescoed ” tondos” showing Jesus’s Presentation to the Temple and Proserpine’s Rape, whose author although different from the one who frescoed the main building still belongs to the same late XVIth century period. 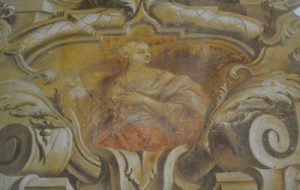 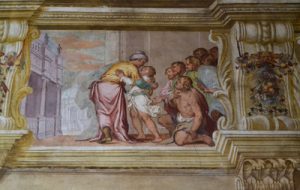